There are certain inspections that likely come to mind when considering buying a home.  Buyers often conduct a home, smoke and carbon monoxide alarm, radon and lead paint inspection, but there is a unique aspect of Boston’s landscape that requires a rigorous inspection that most buyers have probably never heard of!

Similar to what is currently happening in Boston, in the late 19th Century there was a real estate development boom that turned uninhabitable wetlands into flourishing neighborhoods.  The Back Bay was literally a bay, but it was filled in with dirt and transformed into one of Boston’s most sought-after neighborhoods.  This transformation however, brought complications.  Building on former wetlands required the use of wood pilings (or tall wooden columns) which are essentially stilts that the buildings sit on.  The pilings go through the dirt fill all the way down to the water and act as structural support for the buildings.  Because of the age and use of wood for the pilings, there is a risk that they will rot and deteriorate causing the building to lose its support.  So long as the pilings remain under water, they will not generally decay, but if they are exposed to air, rotting occurs.

Monitoring ground water levels in these neighborhoods of Boston is essential, so in 1986 the City of Boston established the Boston Ground Water Trust to do just that.  The review and analysis of these well readings could indicate whether your building is at risk.

This is just one of many items that we discuss with our clients buying homes in these areas.  If you are looking to purchase in any of the areas listed below, give us a call!

The neighborhoods affected are the Fenway, Back Bay, South End, Bay Village, the flats of Beacon Hill, Chinatown, the Leather District, the Bulfinch Triangle, the North End and Downtown waterfronts, the Fort Point Channel section of South Boston, and sections of East Boston. 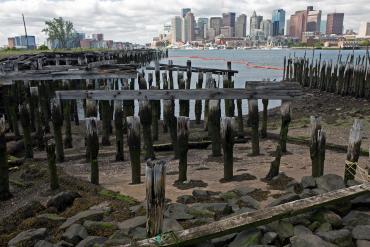